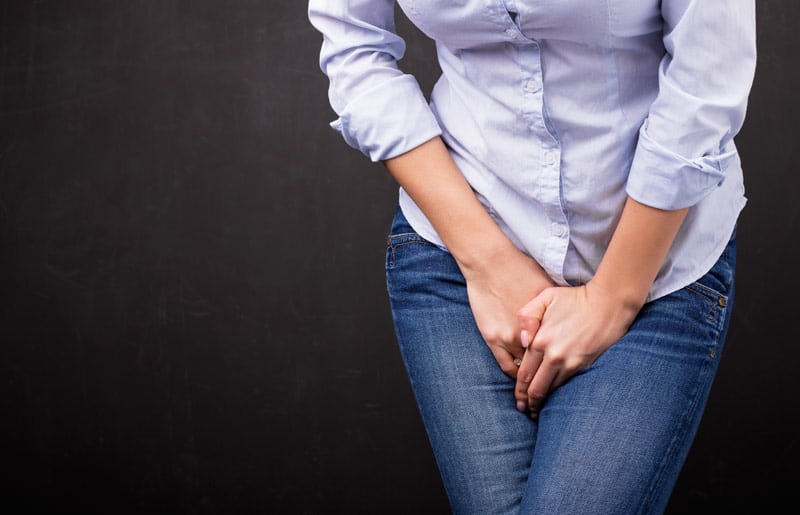 Urinary incontinence is a very prevalent condition that becomes even more common with age. According to the Continence Foundation of Australia, it affects 37% of Australian women, and one in ten adults over the age of 65. There are different types of incontinence with unique causes. Leaks can range from a few drops to a heavy stream, depending on the type and severity of the condition. The most common forms of incontinence are stress incontinence and urge incontinence. Some patients experience symptoms of both.

Stress incontinence is sometimes called “postpartum incontinence” because it so often effects women after having children.

People with stress incontinence often experience leakage when there is a sudden contraction or pressure on the pelvic floor, such as from sneezing, lifting heavy items, laughing or running. Some patients have gone so far as to nickname their condition “sneeze wees.”

During pregnancy and childbirth, the muscles that support the bladder can over-stretch, which causes stress incontinence postpartum.

Although common postpartum, stress incontinence also affects women in menopause. As oestrogen levels go down, the muscles that support the bladder lose some of their strength, making them less capable of support.

Childbirth and menopause can also lead to vaginal prolapse, which can be another cause of urinary stress incontinence. Prolapse occurs when a pelvic organ, such as the bladder or intestines drops onto the vagina. In addition to incontinence, prolapse can result in a lump in the vaginal wall and pain or discomfort during sex.

Other causes of stress incontinence can include chronic cough, obesity, muscle strain or bladder infections. It can also come with general ageing in which the muscles become more lax,

In some cases, stress incontinence can be treated with exercise to strengthen the pelvic floor, laser treatments (but be sure to see a medical professional who is experienced with lasers), or as a last resort, surgery.

Urge incontinence is characterised by the sudden urge to urinate and inability to hold it long enough to find a bathroom. It is also commonly known as overactive bladder.

Urge incontinence can have similar causes to stress incontinence, but it could also be caused by bladder inflammation, spinal cord injury, or kidney and bladder stones. It can sometimes be a sign of a more serious condition such as diabetes, cancer or multiple sclerosis.

Other Forms of Incontinence

Gross total incontinence is characterised by constant leaking from the bladder. It may occur in individuals whose anatomy developed differently, or it can be brought on by a nerve-related injury or a large opening in the bladder. Leakage occurs because the bladder loses the ability to store urine and function properly.

This occurs when the bladder is functional, but a person is heavily delayed in trying to get to a bathroom. It can affect elderly people with mobility issues or persons with disabilities. This condition might be managed by planning ahead to identify nearby bathroom locations and wearing an incontinence pad.

Symptoms of overflow incontinence might include both leakage and retention. It is usually caused by blockage, such as prolapse, or by weakened bladder muscles. In some cases, it can be related to neurological damage caused by stroke, multiple sclerosis or diabetes. Treatment for overflow incontinence involves moving the blockage when possible.

Will incontinence go away?

Incontinence will not go away on its own, but depending on the type of incontinence that you experience and the cause, it can often be treated.

The first line of treatment for stress incontinence is pelvic floor exercise to strengthen the muscles that support the bladder. If exercises aren’t enough, there are laser treatments that strengthen the supporting tissues by stimulating the collagen cells to regenerate and rebuild.

In some cases, surgical implants such as a catheter or pessary might be recommended.

For any form of incontinence, it’s important to speak to a doctor about your individual causes, symptoms and the right steps forward for you.

Do you experience incontinence?

Our doctors have very high levels of training and experience in laser treatments for incontinence. Come in for a consultation to find out more.
Booking Enquiry Booking Enquiry
02 8459 0312