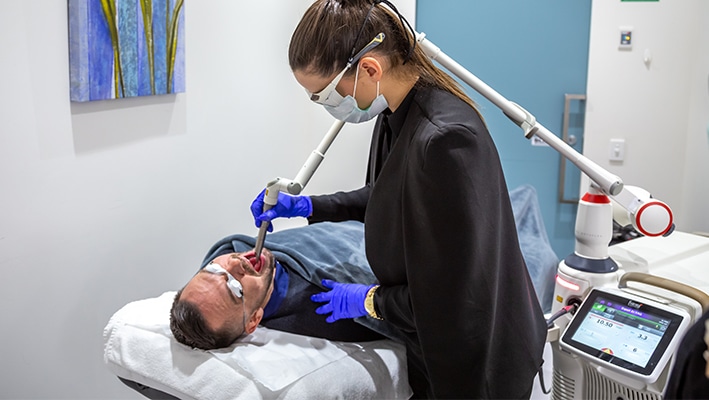 Snoring and sleep apnoea have considerable impacts on the health, wellbeing and sleep hygiene of both you and your bed partner.

There are two common treatments available that both use laser, though they couldn’t be more different. Those are laser-assisted uvulopalatoplasty (LAUP) and laser snoring treatments (also known as NightLase or SleepTight).

LAUP uses a fractionated CO2 laser, which is an ablative laser. It is commonly used in cosmetic medicine to treat fine lines or scars by removing the surface layer of skin (a procedure that is sometimes known as “laser resurfacing”). It’s also been used medically to remove warts.

In LAUP, a local anaesthetic is administered, and a CO2 laser is used to remove small amounts of tissue from the uvula and the soft palate. This prevents it from flapping in the airway during sleep and producing the sound of snoring.

There are some risks associated with this treatment. A recent literature review of 42 different studies found a small yet statistically significant rate of velopharyngeal (VP) insufficiency (a condition in which the soft palate does not press up against the back of the throat during speech and causes difficulty speaking clearly) after LAUP procedures. The same review also found a statistically significant rate of globus sensation, in which a patient constantly feels a lump in the throat.

The procedure is also not permanent and there has been some concern around the possibility of scar tissue. There may also be a considerable amount of pain experienced after each treatment, and the recovery time can be up to two weeks.

Laser snoring treatments, also known as NightLase or SleepTight, don’t use a CO2 laser to remove tissue, but a non-invasive Er:YAG that works with heat. The SleepTight Er:YAG laser uses carefully controlled heating to stimulate the collagen fibres in the deeper tissue in the soft palate. Once stimulated, the fibres begin the process of neocollagenesis which restores strength and elasticity to the soft tissues in the palate at the back of the throat. This prevents the soft palate from hanging down into the airway during sleep where it would previously vibrate and create a snoring sound. Oxygen is also better able to travel through the airway as the soft palate no longer obstructs it, which means improved breathing.

Laser snoring treatments are considered non-invasive and no anaesthetic is required. There may be some short-term risk of mild blisters or burns, but these are rare, and they normally resolve within a few days. When the treatment is performed by professionally trained medical staff who are familiar with lasers, those risks are very minimal.

There may be some mild soreness, similar to the sensation of having a cold, for just a few days after treatment. There is far less discomfort involved with laser snoring treatments than with LAUP.

A clinical trial published in the Journal of the Laser and Health Academy determined that the Er:YAG
was a safe method to reduce the severity of snoring and sleep apnoea; snoring also improved for 74% of 57 participants. In another study performed by the University Clinic of Respiratory and Allergic Diseases in Slovenia, the volume of participants’ snoring was reduced by 30%.

No complications were reported after laser snoring treatments in any of these of these studies.

Laser treatments can help to reduce snoring, but they are most effective when a holistic approach is taken to treat the patient. SleepTight is our unique program that includes consultation, lifestyle adjustment, training to sleep in a better position, laser treatments and objective tracking of results.

Snoring may be directly caused by the soft palate hanging into the airway during sleep and vibrating in the wind, but multiple factors contribute to this. Excess weight, for example, puts additional pressure on the airway. Poor sleep husbandry can also contribute to snoring.

In a SleepTight clinical study involving 4,804 treatments, there was a 93% success rate for clients who complied with the program, meaning that they followed their nurse’s advice, wore a small tracking device when needed and had laser treatments at the recommended intervals.

Are you considering treatments for snoring?