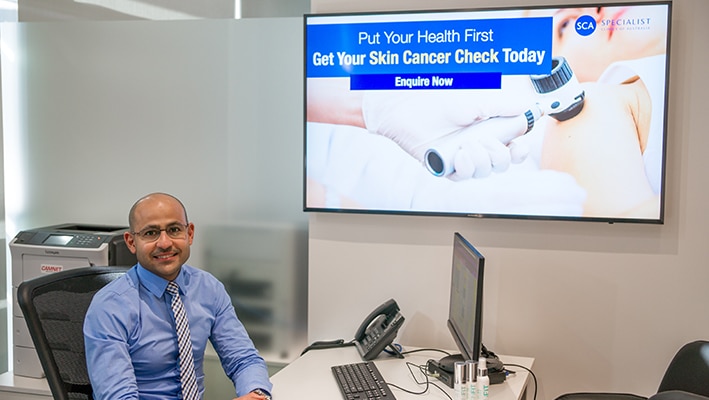 In skin cancer medicine, we talk about primary prevention and secondary prevention, Dr Ahmad explains. Primary prevention refers to the steps you take to avoid cancer (that’s your sunscreen and protective clothing, checking the UV Index, etc). Most of this is up to the patient, with guidance from a doctor or professional organisations such as the Cancer Council.

Secondary prevention is an effort to detect cancer as early as possible. Ideally, you should do a self-check at home every two months to look for anything new, any spots that have changed, or any unprovoked bleeding or ulceration. If you notice anything unusual, or anything you’re uncertain about, you should see a doctor.

The scary thing about skin cancer is that you can’t always see it spreading. Dr Ahmad explains that most subtypes of melanoma, and almost all squamous cell carcinoma (SCC) do not spread out across the surface of the skin, they spread down beneath the skin. From there, it is unpredictable where it will go. If it gets to the lymph nodes, it can be quite serious, so your medical professionals aim to catch it before that can happen. If they see a suspicious spot, they’ll remove it and send it for laboratory testing, preferably before it can spread anywhere.

Dr Ahmad says that its common for patients to feel surprised at a serious diagnosis; people know it can happen, but they don’t think it’ll happen to them. This often the reason why people may be lax about wearing sunscreen and getting their regular skin cancer checks.

Of his patients who have had a diagnosis early enough to intervene and prevent the cancer from spreading, Dr Ahmad says that they become much more vigilant about primary prevention and doing self-checks, which is important. Another interesting trend that he’s noticed is how his patients tend to become more responsible about skin cancer prevention after they have children, especially his male patients who tend to be more relaxed about it when they’re single.

It’s important to Dr Ahmad to encourage his patients to come in when they aren’t certain, he says. Even if a patient comes in with a freckle that looks like nothing, he says that he’s glad they’re being cautious. “It’s never a waste of my time, or the patient’s time” Dr Ahmad says. He would rather see a patient for something benign than have a patient wait too long to see a doctor about something potentially serious.

As we always say in clinic, prevention is best and early detection is next.